HCG levels during pregnancy, ‎Ectopic Pregnancy and in Miscarriage Interpretations

HCG beta subunit levels differ in a very wide range during pregnancy months, nevertheless the normal pregnancy must come with hcg levels in the normal ranges according to many hcg level charts available today,
If the result of the pregnancy hormone outside the limits of hormone levels recorded in the hcg levels map, we expect disorder in the course of pregnancy or expect the presence of an unwanted pregnancy or another organic abnormality as in:
Tubal pregnancy, or ‎Ectopic Pregnancy.
Testicular cancer
Trophoblastic disease from pregnancy
Threatened abortions
Preeclampsia
Placenta previa suggest a baby with down syndrome (DS), an amniotic fluid biopsy, CVS or quad screening may be required. HCG levels appear abnormal.
Detection of premature rupture of the membranes (measurement in vaginal fluid)
Risk calculations for trisomy-21 and trisomy-18.
HCG levels in case of IUI
B-HCG increase rate post IVF.
HCG subunit levels during pregnancy:
Simply the normal pregnancy have a hcg hormonal level in the normal ranges recorded in any B-HCG chart.
Signs and symptoms reassure you are a normal pregnant include:
HCG doubles levels every single day with constant increasing rate.
HCG level is 1900, how many weeks of pregnancy?
The BHCG levels between 1-4 weeks pregnant when you say you are anywhere between 1-4 weeks pregnant you have to be at least 3 to 4 weeks to even register pregnancy and this is why. 1st week menstruation, 2nd week ovulation, 3rd week conception, 4th week implantation.
My beta was 2256 at 4 weeks 4 days pregnant, how many weeks in sonogram?
Ultrasonography must say 4 weeks 4 days too if you performed an accurate calculation of your missed period date and ovulation date and get an sensitive b-hcg tests.
My SERUM BHCG 15070.3 mIU/mL how many weeks is my pregnancy?
This hcg level show up in the week 6 LMP and 30 day post ovulation.
Does your hcg levels have to be a certain level for the doctors to do a sonogram?
A sac of cells will appear in U/S screen after 1000 – 1500 IU/L of B-HCG.
What is the level of hcG subunit during ovulation phase?
As I mentioned that the hcg hormone should be at the level of 5 – 25 IU/L which give you a negative pregnancy test by any analytical method.
Learn how to calculate the days post ovulation?
Interpretation of different levels of BhcG with examples
Follow up hcg level in ectopic pregnancy:
Signs of ectopic pregnancy: 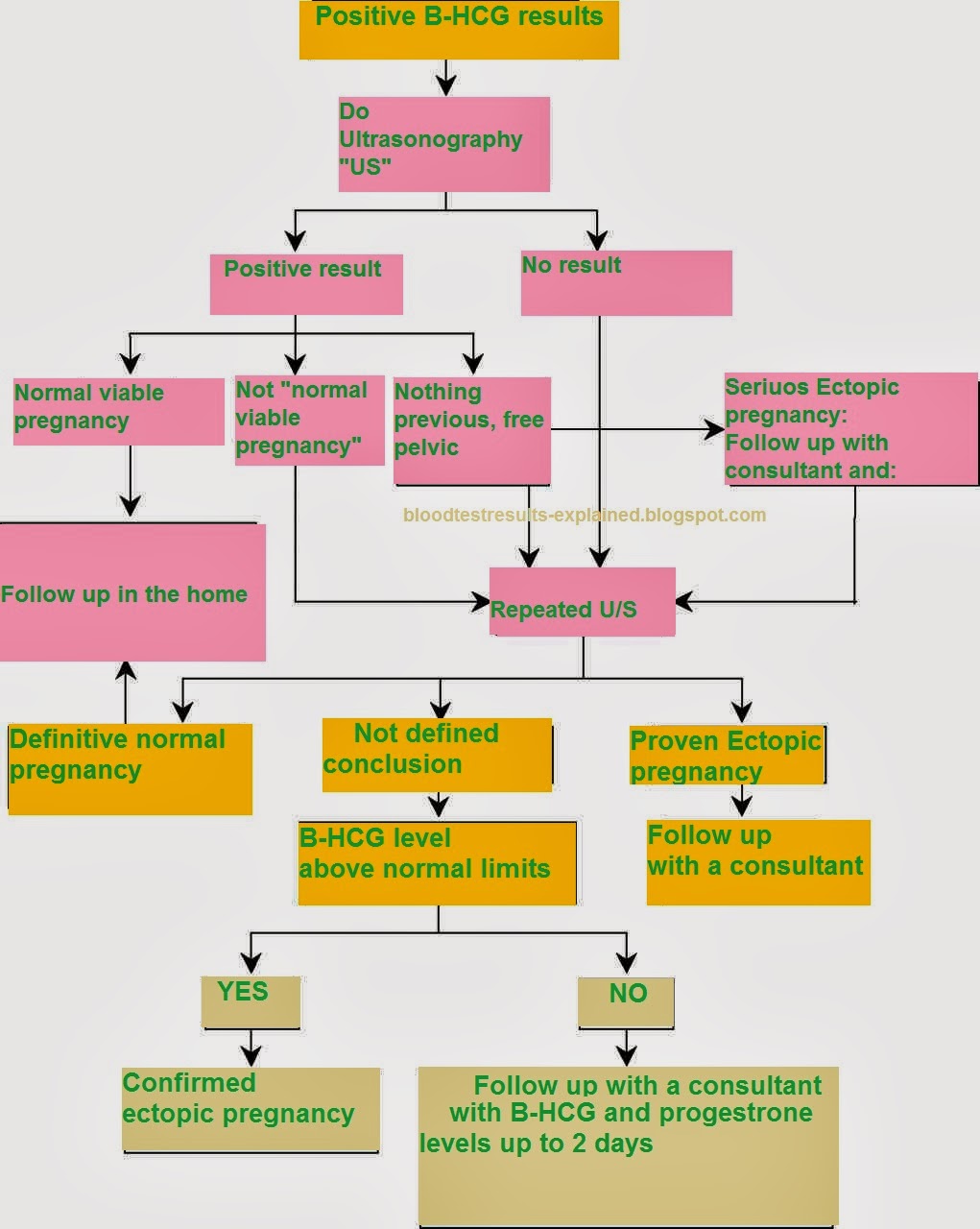 Example of an ectopic implantation:
I took a pregnancy test and it was positive but the ultra sound found nothing there, so we took the HCG level and it was 540 IU/L
Interpretation of B-HCG subunit levels in case of early miscarriage:
Low hcg level mild cramp light brown spot are the main signs. Doctor can give you something to double your hcg levels while pregnant and stabilize the fetus on the placenta.
What is hcg level in early miscarriages?
What is the chance of miscarriage after low hcg level in early pregnancy?
Signs of early miscarriage and pregnancy loss:
B-hCG rise very slowly at the beginning and hcg level very low than normal range during first 2 weeks and still dropping until the pregnant feel very tired and suffering from low back pain with pain in one breast or both or pain in chest area, also the light brown/red/pink bleeding is the most sharp indicator of pregnancy loss, blood positive hcg test and urine pregnancy test result is negative.
Maximum beta hcg level recorded in miscarriage
According to a standard B-HCG levels chart:
If pregnancy is ≤1 week  the hcg level must be in 5-50 mIU/mL (5-50 IU/L) but many b-hcg charts report that hcg during first three weeks must not be lower than 25, this tell us that any hcg value between 5 – 100 during this stage cannot considered abnormal unless bleeding starts.
Actually a very low positive result will show up in very early pregnancies and the level of BHCG in the urine is not great enough for a commercial pregnancy test to detect.
Also very early miscarriage usually indicated from urine pregnancy test was negative because there’s not enough Hcg in the pregnant blood for the urine test to detect. Any blood test that has an Hcg level of 5mIU/ml or greater is considered a positive result, but it doesn’t necessarily indicate a viable pregnancy as I mentioned above.
B-hcg levels after miscarriage must go low as 5 IU/L soon.
Can a doctor decide a miscarriage if your hcg levels are low?
Sudden miscarriage is the usual after low B-HCG level earlier in pregnancy
If your hcg levels are rising but not doubling does that mean you are still pregnant?
Yes but my need some medication.
What do low hcg levels but doubling mean?
Normal pregnancy and medications may be required.
My serum Hcg level was just 27mIU/ml in the first week?
It is extremely low level of hcg in the first week, for this stage of pregnancy it is expect to be a miscarriage. Recommended to repeat test after few days in another lab unless you see the bleeding. The levels of Hcg should rise steadily (in a typical pregnancy) the levels double every few days until they eventually reach into the tens of thousands and level off toward mid-pregnancy. If no bleeding, your doctor may start fixation process by progesterone.
Unstable pregnancy lead to a possible sudden miscarriage:
I am currently pregnant but unfortunately it did not develop and stopped growing at 6 weeks (I am now just waiting for bleeding to start) and I should be nearly 9 weeks now. But my HCG level at 6 weeks was 3020?
It is a very low hcg level at 6 week LMP but it is still in the normal range under the hcg map, consult a doctor for possible medication.
Confusion between early pregnancy or miscariage:
My observed hcg value is 522.5 (The test is HCG beta subunit, serum by CLIA (31 days of cycle). Probably it is a very early pregnancy or onset of a miscarriage. If the woman is pregnant the next hcg test will go up considerable and if it is a miscarriage the level of hcg subunit will drop.
Comment with your experience.