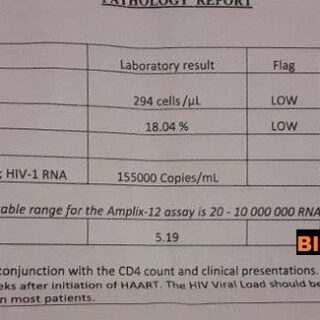 What does CD4 stand for?

CD4 represents the receptor antigen found on some white blood cells (helper T-Cells), monocytes, and macrophages cells in the human blood, CD4 cells are prone to attack by HIV virus, that’s why “the CDC” used to use CD4 count for determining the immunodeficiency status of the AIDS-infected persons, but not CD4 count alone, because the CD4 count can go down in many diseases other than HIV infections, such as a person on chemotherapy, Herpes virus, pneumonia, or even one have a flu.

“CD4+” is a blood test used for measuring the count and percentile percentage of white blood cells that carry CD4 antigens.

What do HIV and AIDS stand for?

So that, not all HIV is AIDS but AIDS is necessarily HIV.

HIV 1,2,0 blood test; is a rapid quantitative test that can be done by two drops of the blood at home, two lines results mean positive (i.e. the antibodies to HIV-1, HIV-2, and Subtype O is found in the whole blood, one line (opposite to the letter “C”) always means negative HIV Antibodies result, a negative result means you’re not infected with HIV virus at all or you infected but your body hasn’t produced antibodies to the virus yet which called (window period). Read more about HIV 1,2,0 test

If you’re in the window period, you must retest for HIV after 4 weeks at least. If you need a more accurate HIV test is the nucleic acid test (NAT) which can detect HIV infection 10 to 33 days after HIV exposure. read the list of HIV tests

What does Viral Load stand for?

A viral load test or HIV PCR is the laboratory method of counting HIV virus such as real-time PCR technique so that when a blood test report says a viral load result is 100, it means the count of virus units in your blood is 100, and when viral load result is written “zero” or “below detection limit” or “Negative”, it should mean that your blood has no sufficient viral units to be counted by the PCR instrument.

And Of course, the Viral load (VL) test result strongly predicts the progression to AIDS disease which leads to death and a surrogate marker for the response to ART therapy treatment.

Acute HIV infection is defined as the period after exposure to the virus but before seroconversion.

Seroconversion or the window period is the period during which the body starts producing detectable levels of HIV antibodies. This usually occurs several weeks after initially contracting the virus. During seroconversion, a person may experience flu-like symptoms, such as fever and body aches.

Below the HIV test chart that shows normal ranges of viral load for untreated patients who are not given medical treatment and those for under-treatment patients:

ART means anti-retrovirus therapy, a treatment method or regimen for patients with the HIV virus.

LLV stands for Low Level Viremia which refers to two or more consecutive HIV-1 RNA test results at least 50 copies/ml, a person in the LLV classification has an estimated prevalence of between 5 and 30%. Low-level-viremia range is between 50 and 1000 copies/ml during ART According to WHO guidelines. Patients in the LLV range can pass HIV virus to others.

Some guidelines categorize LLV range during Antiretroviral treatment into three subcategories to ease the follow-up process.

Undetectable viral load means that your blood and body fluids don’t have sufficient HIV virus RNA units to progress to AIDS disease or to pass HIV virus to another partner during sex, in other words, you are neither infected nor infectious. So that No, you cannot infect someone if your viral load is undetectable.

Medium and high level viremia means the HIV virus units is between 1,000 – 100,000 copies per mL of blood, which is sufficient to let the HIV virus pass into blood and most of body fluids such as mucus, urine, stool, and semen. Semen infection with HIV viral units let the virus transported during unprotected-sex with a partner and become infectious by a high degree.

Extreme level viremia is any HIV count greater than 100,000 viral copies per mL of blood, this range represents the highest risk to develop AIDS disease and the highest mortality. A person who carries more than 100,000 units of the AIDS virus in his blood must be quarantined as soon as possible because he is in a very contagious state to others and is at great risk of death.

The below table contains updates from the Association for Molecular Pathology which maintains an up-to-date listing of “FDA Cleared/Approved Molecular Diagnostic Tests.” To access this list, please visit http://amp.org/, under “Resources.”

Below are universal normal ranges, but each laboratory can make its range-chart.

The normal range for a CD4 count is between 400 and 1,600 cells per microliter of blood (uL), it means the AIDS-negative person when do CD4 count must see his result in between these limits.

Normal CD4% is >25%, it means normal person must have more than 25% of the counted cell contain CD4 antigen.

A case study from messages sent to the official Facebook page

In that case, we can find low CD4 count and low CD4 percentile percentage with high-level-viremia more than 150,000 copies of HIV virus, these results present progressive HIV infection which need treatment and quarantine.

CBC test results of the patient show the low total count of white blood cells and low neutrophil cells which is an indicator of low CD4 T cells as well, the low the neutrophil cells the higher the HIV viral load.

Hope that information helps and let me know if you need more information.

Q: I ask, how can someone have HIV disease without sperm ejaculation?

My name is Hellen
Female

I just want to ask a question how can someone have HIV disease?

Is it when you have unprotected sex and the male releases his sperm inside the woman, or even without the release of sperm into the woman, just sex without condoms, can it make a lady contact HIV?

The real Medical Lab Scientist Explanation of:
Which is the most accurate test for HIV?
Best time to take HIV tests
When to get tested for HIV AIDS virus?
False positive/negative HIV test results

HIV is the human immunodeficiency virus, virus causing AIDS disease.
The median time from infection to the development of AIDS is about 10 years.
More Information about the HIV virus results here.

Types of HIV testing Kits:
The specific the HIV test the earlier and effective the treatment.

Antibody HIV tests:
HIV Virus Antibodies can take up to 6 – 8 months to show up in the Blood.
they detect HIV antibodies, hence it may not valid for early detection of HIV, because body takes up to 4 weeks to produce enough antibodies against virus’s antigens.

Antigens HIV tests:
HIV aids Antigens shows up in the blood tests in 2-4 weeks after infection.
It is the tests of choice to early detecting Virus more than 2 weeks earlier than HIV Ab tests, because HIV Ag tests detect the core body of the virus (Antigen), thus HIV virus can be detected earlier and treatment starts earlier and effectively taken.

How to take swab sample for HIV test?
Swabs the upper and lower gums of your mouth, places the sample in a Sterile  vial or cup.

Modern Point of Care Tests to diagnose HIV virus
POC HIV test for aids virus, which test a sample of saliva taken from the mouth or a spot of blood taken from pricking a finger with a needle. The result is available within a few minutes, in the clinic.

First blood test run by smartphone
It gives HIV, syphilis results in 15 minutes
The results of the study, which was published Wednesday in the journal Science Translational Medicine, were just as reliable as those you’d get in a professional lab, Sia said.
Researchers have invented a smartphone device that performs a quick — and reliable — blood test in the field to check for infections.
The device — known as a dongle — only requires a pinprick of blood, with results available in 15 minutes. The accessory, which plugs into a smartphone or computer and runs off an app, is lightweight and inexpensive. Though not commercially available yet, its developer, Samuel Sia, estimated it would retail for about $45.
He said it is the first blood test for a smartphone.

Follow up and After Diagnosis HIV tests
Used After Diagnosis and confirmation that HIV virus is exist.
Effectiveness of the treatment course or there is Drug resistance and virus mutation.
How complicated the virus symptoms is going to be.

6- Cryptosporidium faecal Test
In immunocompromised patients (especially those with HIV), Cryptosporidium may cause
a severe prolonged watery diarrhoeal illness. Stool sample tested on request and fast treatment is required.

8- Tests for Possible second infection
HIV Patients have a great risk for other sexually transmitted diseases  (STDs), such as gonorrhea, syphilis, herpes, and Chlamydia, or other infection as hepatitis, tuberculosis, and toxoplasmosis. 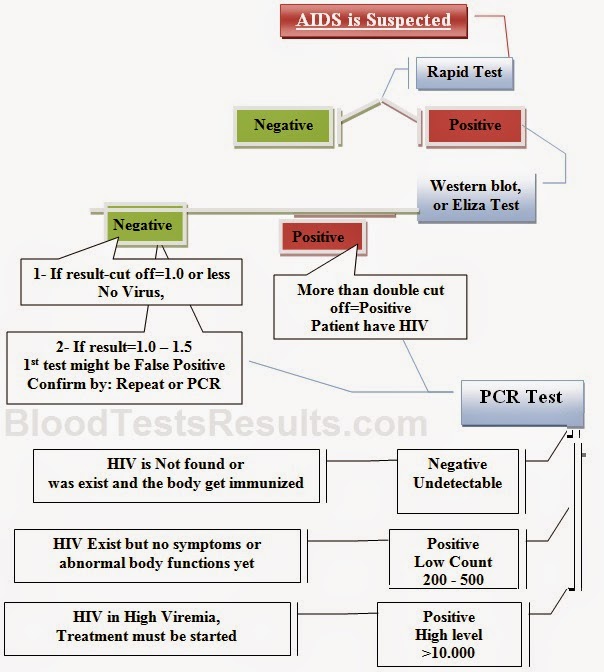 Symptoms and Lab tests Relationships:
Some people living with HIV have no signs and symptoms for many years.
People who have recently been infected with HIV often experience a short, flu-like illness two to six weeks after infection. Symptoms include fever, sore throat, and body rash.

Early symptoms of HIV include exacerbation of previous skin disease, e.g. eczema, somewhat recalcitrant tinea, surprising shingles, oral candidiasis, recalcitrant vaginal candidiasis : in other words, common or ordinary events occurring oddly or excessively.
Lymphoma predisposes to HIV infection and HIV is an uncommon cause of acute
immune thrombocytopenia.
Pneumocystis carinii pneumonia (found only when patients have CD4 counts
<200 a="" and="" be="" breath="" cmm="" confirm.="" cough="" creeping="" diagnose="" dry="" easy="" essentially="" fever="" illness="" is="" may="" most="" not="" of="" often="" or="" p="" preventable="" shortness="" slow="" to="" which="" with="">
How to read test results?
Are you know when to take HIV test?
please read my previous topic.
Where HIV testing is available in your area?
Call: 800-CDC-INFO (232-4636).

Do not forget to increase the awareness about AIDS and share the Article.