Q: Can prostatitis misunderstood as soft lesion |do we need to go for biopsy?

Question: My dad’s age is 75 |after getting severe uti PSA total was 41| after 4 weeks it came down 10.85| we did mri. It was pirads 3| can prostatitis misunderstood as soft lesion |do we need to go for biopsy?? My dad has moderate enlarged prostate but no issue in urinating. Takes several blood pressure medicine.

Answer:
Priad3 in MRI is a moderate score which means equivocal likelihood for prostate cancer.
Thus Pirad3 lesions can be seen with cancer (<5%) and benign prostatitis (>90%) as well.
UTI usually causes the PSA to temporarily elevate and can be corrected with antibiotics, in this case the PSA went down but still in the grey zone which means moderate risk of prostate cancer.
Any risk degree for prostate cancer must be checked, free PSA % and DRE are helpful tools especially if MRI imaging isn’t clear like this.

Recommendations:
Short-term follow-up imaging is advised for these patients, less than 6 months.
Do biopsy if PSA free% is lower than 25%, Positive DRE, with PIRAD3 MRI.
Treatment and management must be done with expert doctor in such cases. 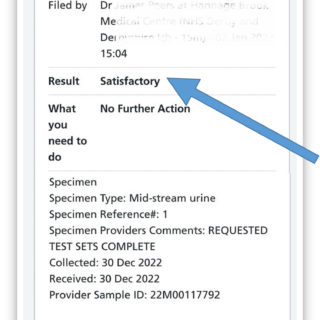 Hi what does mean that’s

Answer:
When your results screen type “satisfactory”, then it’s simply means you have no bad findings and your results is just fine and you should not worry about harm or bad issues in your lab test results.
But, this is for the already done tests, while other tests you don’t take we still don’t know what they are yet.
Also, this doesn’t mean that your health is perfect as this flag is for the current test result.

It’s one of the terms used in the lab reports to help people simply know what the conclusio of there results, similar like using “A” letter before or after the final result values, read more about flags and alarms on test results. 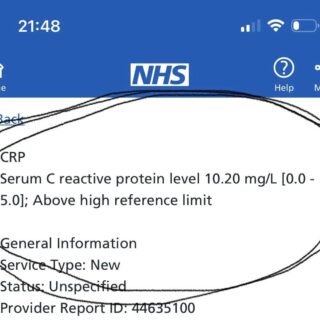 For 8 years my GP said I have fibromyalgia but is now swaying towards RA she said some results indicate yes some no ?

The full question:
Can anyone please help me with these results?? For 8 years my gp said I have fibromyalgia but is now swaying towards RA she said some results indicate yes some no ?? I’ve no idea what they mean but I’ve so much pain everyday

ANA is not specific for a disease but can be used as a screening marker for many autoimmune disease, however we can’t depend on ANA solely to diagnose such diseases because it can be negative in the same time the patient suffering from whole body’ pain.
Thus Negative ANA doesn’t exclude that you carrying autoimmune disease.
ESR and CRP tell how extensive the inflammation you have but also they can’t indicate a specific disease, rather they are mildly increased while in most autoimmune disease show markedly elevated (i.e. ESR 100).

I can tell that nowadays there’s an accurate test called “The FM/a Test” that’s 99% accurate for Fibromyalgia which eliminate the confusion.
Also, There’s a more accurate and specific test for Rheumatoid Arthritis called “Anti-CCP antibodies“. 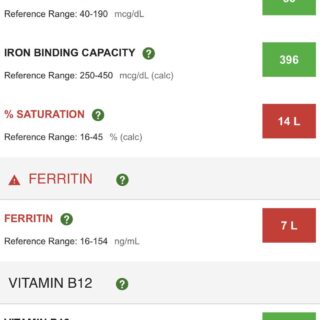 Question: Any advice what else to take?
I have very low ferritin (level 7 and it’s supposed to be at 16 on the low end)
I take Floradix (40 ml a day) , ferrous sulfate(65mg daily) , vitamin C(2000 mg daily)
My ferritin will not budge and I feel awful everyday and I’m trying to push through it but everyday I get up I don’t feel like working because I have to constantly take breaks because I get so run down. Any suggestions will help. They told me they wanted to check my ferritin in February and then they want me to see hematology but I don’t not think I can wait that long
Here are my latest labs in November

As you may know: iron enters the blood through food, then the body stores part of the iron in the form of ferritin. Thus Ferritin is the iron stock that the body keep it to compensate for the lack of free iron that runs in our blood, therefore when the stock decreases, it is obvious to say that the blood enters a state of anemia, and the lack of iron-stock is considered one of the precursors to iron deficiency, and therefore anemia.
Although most laboratories set the minimum normal level for iron stocks to be 7, in fact, the body becomes actually anaemic when the iron stock is less than 30, which requires immediate treatment.

In order for us to know what is the most appropriate and fastest treatment for iron stores, we must know the correct diagnosis that indicates the causes of iron deficiency, including:

First: There may not be enough iron in the food you eat, and this lacking has been prolonged in your meals for a long time until it affected your iron stores and made them almost empty.

Second: There may be a deficiency in the normal number of red blood cells in the blood, knowing that the red blood cells are the containers that contains the hemoglobin compound, which consists mainly of iron and proteins.

Third: There may be something that depletes the iron resources and makes the iron stores exhausted, which pushes the body to consume more iron, and thus the ferritin continues to be broken down to convert it into free iron that it uses in the manufacture of blood cells, and therefore the much breakdown of ferritin makes it decrease sharply, especially if there is nothing to compensate for that because the bleeding continues.

Examples of blood loss: Bleeding from the reproductive organs of women (the uterus and ovaries), bleeding from the intestines and the digestive system in general, and cancerous tumors of course are not far from being suspected.

Fourth: The red blood cells may be normal, and there is no bleeding that throws iron out of the body, and yet the body is unable to benefit from iron, as happens in diseases of the absorption, and therefore the iron regulation system in the body tries to compensate for the false iron deficiency by breaking down more of iron, and therefore a deficiency appears in the iron stores, although free iron is very normal.

Fifth: There may be a deficiency in the protein that transports iron to all cells of the body, which is called “transferrin.” Therefore, when the body does not find iron, it rushes to break down more ferritin stored in the liver, thinking that will compensate for the lack of iron that it does not find.

It is interesting: the ferritin in your lab results decreases first before the free iron itself in the blood and before there is a deficiency in hemoglobin, and this indicates that there is a disorder in the storage or breakdown of iron, and from the results we can discern the actual presence of iron, but the percentage of iron saturation is very low, and therefore it is not an increase in cracking to the stores of iron, but there is probably a weakness in the inputs of iron to the body or an increase in the repelling of iron from the body, such as what happens to women who suffer from severe bleeding during abnormal prolonged menstruation.

Therefore, you have low iron stores with no anemia.

What corrects the level of ferritin in the blood quickly?

Eating iron-rich, such as red meat, along with taking iron pills daily, may restore the iron storage to its correct position within three weeks, but there are shortcuts, and faster ways, including: injecting iron by using an intravenous solution may raise iron in the blood faster, of course, with taking tablets Iron and vitamins that contribute to benefit more from iron supplements and thus quickly restoring iron stores, which will rapidly raise ferritin.

Do you know the meaning of “L” sign after ferritin value?