My hCG levels were at 720 at four weeks and 5 days. They took my blood two days later and my levels had jumped up to 20,000. Could I be having twins?

After that, you can compare your beta-hCG level with those expected with twins pregnancy in the bHCG level for twins chart 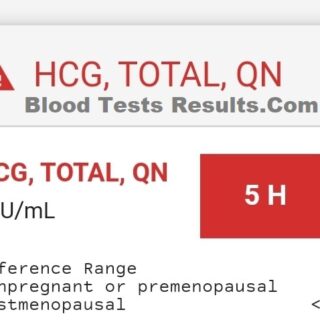 Is BHCG less than 5.0 considered a Positive or a Negative Pregnancy Test Result?

The medial laboratory interpret the BHCG levels like that:

B-hCG < 5.0 usually means negative pregnancy test, but if the date of menses is still early, the hCG lower than 5 may mean a very early pregnancy, that’s because the hCG hormone can be detected 6 days earlier before the due date, and therefore you must repeat hCG test after the menstrual cycle is late than the usual date every month, and this repetition is to make sure that HCG 5 increases and that it was due to very early pregnancy.

Also, hcg <5 can be seen if the woman is in premenopausal (before girl puberty) or postmenopausal stage (usually after age 50 of women there’s no menstruation), it means the girls before menopause may normally show b-hcg number lower than 5, and women stopped their menstruation can still naturally see hCG number lower than 10 without pregnancy or any disease.

Note that some tumors can see slowly increasing hCG levels, but this is another article, be tuned.

The woman told me that she was worried and confused about the conflicts of BHCG levels and ultrasound.
The first doctor recommended methotrexate upon diagnosis as ectopic pregnancy but the second doubling HCG blood test with white dot sac suggests a blighted ovum which require a dilation and curettage procedure.
What’s the opinion of medical science?

What blighted ovum is?

A blighted ovum is an early pregnancy failure after the fertilized ovum attached to the uterine but failed to develop an embryo even after 14 week LMP. That’s why I have blighted ovum pregnancy?

When blighted ovum is occurred during the pregnancy?

A blighted ovum occurs during the early pregnancy term (the first trimester), may be the woman didn’t know that she’s pregnant yet.

HCG level 680, after 48 hour HCG level 1800, no sac on ultrasound, no bleeding and no cramps.
Had a blighted ovum?
Answer: The case is for a normal pregnancy till now and the time scale can’t tell the right expectation, the advice is to wait until the week 8 at least.
Full: HCG level chart

Can be a blighted ovum even after 12 weeks?

The Answer: A small sac with nothing in it and HCG level below 5 units after 5 weeks must refer to a blighted ovum. You had missed miscarriage. Get the Ob/Gyn advice for natural miscarriage or by D&C operation. What to do for blighted ovum management?

If your body still acting as you’re pregnant, doctors would recommend to wait few days until the body passes this anembryonic (no embryo) pregnancy naturally.
And can conceive as close as the next week, as the period is due within a month and HCG levels can back after nearly two weeks.
If you’ve blighted ovum conception your doctor will have two options, the pills or surgery.
You shouldn’t be scary of D & C, it’s for your safety. The sac would expel by it’s own but remnants in the uterine may cause infection, so that the D & C would be beneficial to avoid complications.
But woman must wait three consecutive cycles before trying to conceive again, the reason is to allow the uterine lining to rebuilt itself in the way to sustain another pregnancy.

What to do with blighted ovum hcg levels and ultrasound?

Blighted ovum is difficult to see on ultrasound until the week 10 LMP.
Blighted ovum HCG levels 5 weeks LMP is within expected levels for normal pregnancy.
Even with no embryo inside the sac the placenta and corpus luteum continue to produce pregnancy hormone at early pregnancy.
At week 4 and 5 a yolk sac and fetal pole but no heartbeat, heart beat is the baby’s life determining factor inside you.
You would find heart beat after week 11, and only babies with heart beat deemed live.
See: HCG level ultrasound and heart beat chart

What to do for blighted ovum with HCG levels rising?

Most woman scarred after week 9 with no bleeding or pregnancy, so please understand first.
If you have or expect a blighted ovum just relax and retest BHCG blood test and ultrasound until the week 12.
Confirm blighted ovum after week 14 with low HCG levels, no visible embryo sac, and no heart beat.
Never rely on the sac size small or big or how sac is measuring when it’s empty.

When do hcg levels drop with blighted ovum?

From 4 to 7 weeks and up to 12 weeks for some women after a successful m/c or d/c operation, beta subunit HCG test after d/c can predict the dropping rate of HCG levels after blighted ovum miscarriage.
Read: HCG levels after miscarriage
We’re welcome to explain your pregnancy blood test results.

High B-HCG Levels and No Image on Ultrasound, What to expect?

How to deal with the confusing problem of not seeing the baby on ultrasound while your hcg blood test say you’re pregnant, how to avoid delay diagnosis of baby? how to protect yourself from misdiagnosis at early pregnancy?
firstly, you must know why pregnant do sono early?
The purpose of the scan is:

Is ultrasound scan do work to detect pregnancy without the hcg blood test?
No, both are used to detect and confirm the progress of pregnancy, although the hcg test results may come up with the earlier sign of pregnancy as closer as 7 days after ovulation and successive implantation which is much more than ultrasound scan do, at 6 weeks of gestation hcg level is well detectable but sonogram is a bit unclear until the week 8, however hcg results only can’t confirm a viable pregnancy until a sac and heartbeat can be clearly detected on the sonar screen.
what to expect from the heartbeat results?
As long as there is a heartbeat, the risk of miscarriage decreases as the gestational weeks go by.
You will asked to repeat the scan and beta subunit hcg if:

7 weeks and no image on sono, no heartbeat, no sac, low hcg levels, what to expect?
Your doctor thinks you might have an ectopic pregnancy or silent miscarriage, take blood tests and/or a laparoscopy.
Remember that: An ectopic pregnancy is a medical term for a pregnancy that is developing outside the uterus, usually develop in one of the Fallopian tubes or inside the abdomen.
Hydatidiform Mole/molar pregnancy: where the cells of the placenta grow very quickly while the baby can’t develop. difficult to be diagnosed on scan so you might find out only after the miscarriage.
let us take this pregnancy quiz to discover why pregnancy hormone is normal but the baby not showing in Ultrasound scan?
Suggested causes and solutions:

The hcg levels chart for viable pregnancy at 6 weeks from LMP (gestational age) :

Read the full interpretation of: hcg chart, hcg for twins, and am I pregnant or late period?